Transformer oil performs two important jobs in a transformer. It helps cool the 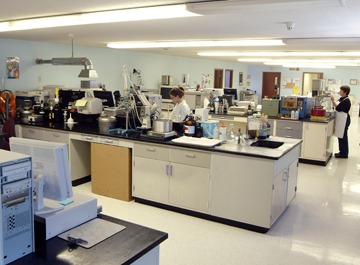 transformer and it is part of the transformer's electrical insulation system. Its ability to perform those jobs may decrease as it deteriorates or becomes contaminated with moisture, carbon, and other foreign material. The immediate though infrequent result of severe contamination with moisture or carbon is dielectric failure and a short circuit. The delayed but imminent result of contamination with oxygen from air is accelerated deterioration of the oil. Deterioration products will eventually precipitate as sludge on the transformer cooling surfaces causing it to run hotter and thereby shorten the operating life. Each increase of ten degrees Celsius operating temperature cuts the useful life expectancy in half. These problems can be corrected before the performance is seriously impaired by removing the deterioration and contamination products. In order to determine if oil is in need of processing a number of tests are needed to be completed on the oil. Several of the most useful oil tests and their significance are stated below.

Dielectric Breakdown Voltage - The dielectric breakdown voltage of an oil is its ability to withstand electrical stress without failure. The test is completed by measuring the voltage at which a flashover occurs between two electrodes. This test is done in accordance with ASTM D877 and serves to indicate the presence of water, dirt, or conducting particles in the liquid.

Neutralization Number - Oil deterioration products, which are acidic in nature, will eventually precipitate and deposit as sludge which increases operating temperature which, in turn, decreases useful life expectancy. The neutralization number is a measurement of the amount of acid in an oil. This test is described in ASTM D974 and the results are expressed as the milligrams of potassium hydroxide needed to neutralize the acid in one gram of oil. This test gives an indication of the extent of oil deterioration.

Interfacial Tension - As sludging occurs in a transformer, polar molecules are formed. An interfacial tension test provides an indication of the concentration of these molecules by measuring the molecular attraction between the unlike molecules at a water-oil interface. Soluble-contamination or oil-deterioration products generally decrease the interfacial tension. This test is done in accordance with ASTM D971.

Color - This test is completed according to ASTM D1500 and measures the color of the oil in the range of 0.5 to 8.0. Deterioration and contamination cause color to change. This change may be detected by comparing current and previous tests.